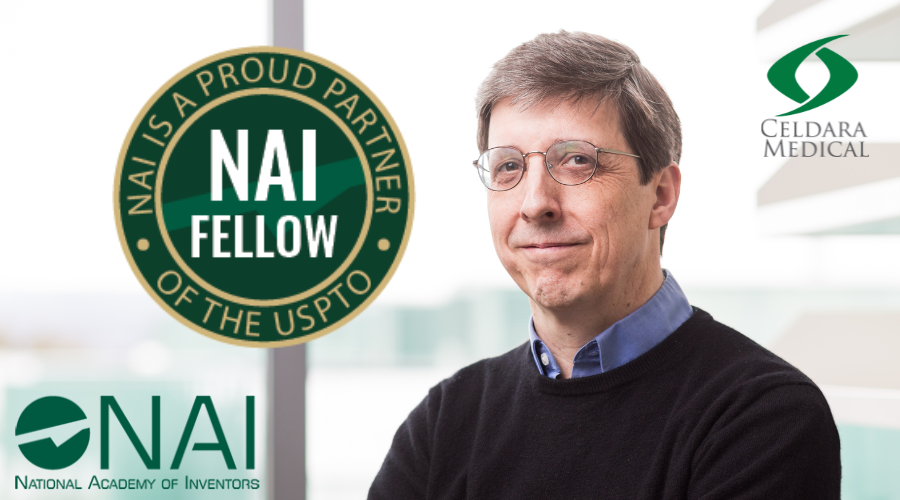 Lebanon, NH: Celdara Medical is pleased to congratulate one of its Scientific Founders, Dr. Charles Sentman, on his recent selection as a 2022 National Academy of Inventors (NAI) Fellow. The NAI Fellows Program honors academic inventors who have demonstrated a prolific spirit of innovation in creating inventions with tangible impact on quality of life, economic development, and welfare of the society. Election to NAI Fellow status is the highest professional distinction accorded solely to academic inventors.

Dr. Sentman is a Professor in the Department of Microbiology and Immunology at the Geisel School of Medicine at Dartmouth College and the Director of the Center for Synthetic Immunity. His research is focused on novel cell and gene engineering approaches to harness and target immune cells for treatment of cancer, inflammation, and neurodegenerative diseases. A pioneer in cellular therapy, Dr. Sentman developed seminal intellectual property regarding allogeneic CAR T therapies, which has been sold and licensed to multiple companies. He has 24 issued U.S. Patents, of which 22 are licensed.  Dr. Sentman’s work is exclusively focused on improving human health, with innovations spanning oncology, inflammation, and neurodegeneration. His cellular therapy discoveries have redefined a field that is helping patients today, with accelerating benefits far into the future.

As one of our Scientific Founders, Dr. Sentman has a long track record of success with Celdara Medical, including key roles in spinouts like OnCyte, LLC (sold to Celyad, NASDAQ: CYAD) and Black Bear Bio, LLC (founded 2022). The partnership between Dr. Sentman and Celdara Medical is a testament to the power of partnership between leading academicians and early-stage biotech to move life-changing therapeutics to the clinic.

Dr. Jake Reder, Co-founder and Chief Executive Officer of Celdara Medical, said, “When I first met Charles, conventional wisdom was that cellular therapies were too complicated. One of the most important things Charles taught me was that to be innovative, one must proactively separate dogma from data. By following the data and the medical needs, he could envision a future where cancer patients could be treated and cured with a living therapy. With the vision to see what’s possible, creativity to generate solutions, acumen to generate solutions that work, and rigor in execution – Charles is an ideal Scientific Founder, and a great friend. This honor is a well-earned recognition of his impact on the world of medicine.”

Dr. Sentman remarked on his collaboration with Celdara Medical, “It is an honor to be selected as an NAI fellow. Translation of ideas from the research lab into the clinic and biotech arena is extremely challenging. It requires a dedicated team effort. Jake, Joana [Murad, Executive Director of Research and Development], and the team at Celdara Medical have been key partners with me to take these inventions and bring them to patients.”

With his selection as an NAI Fellow, Dr. Sentman has joined a worldwide community representing more than 300 prestigious universities and governmental and non-profit research institutes. Collectively, the Fellows hold more than 53,000 issued U.S. patents, which have generated over 13,000 licensed technologies, 3,200 companies and created more than 1 million jobs. In addition, over $3 trillion in revenue has been generated based on NAI Fellow discoveries. The 2022 class of NAI Fellows will be honored and presented their medals at the 12th Annual Meeting of the National Academy of Inventors on June 27, 2023, in Washington, DC.

Celdara Medical congratulates Dr. Sentman on his well-deserved election as a 2022 NAI Fellow, and looks forward to continuing our partnership as we bring hope and health to patients worldwide.

About National Academy of Inventors

The National Academy of Inventors is a member organization comprising U.S. and international universities, and governmental and non-profit research institutes, with over 4,000 individual inventor members and Fellows spanning more than 250 institutions worldwide. The NAI was founded in 2010 to recognize and encourage inventors with patents issued from the U.S. Patent and Trademark Office, enhance the visibility of academic technology and innovation, encourage the disclosure of intellectual property, educate, and mentor innovative students, and translate the inventions of its members to benefit society.

Celdara Medical was founded by Drs. Jake Reder and Michael Fanger in 2008 and is headquartered at the Dartmouth Regional Technology Center (DRTC) in Lebanon, NH. Celdara Medical builds academic and early-stage innovations into high-potential medical companies, identifying discoveries of exceptional value at the earliest stages and moving them toward the market. Celdara Medical partners with inventors and their institutions, providing the developmental, financial, and business acumen required to bridge discovery and profitability. With robust funding options, a diverse and high impact Programmatic pipeline, and partnerships with world-class academic institutions and industry leaders, Celdara Medical navigates all aspects of a complex industry, accelerating science to improve human health.

Let's get in touch

Give us a call or drop by anytime, we endeavour to answer all enquiries within 24 hours on business days.

Give us a call or fill in the form below and we'll contact you. We endeavor to answer all inquiries within 24 hours on business days.
(617) 320-8521
info@celdaramedical.com